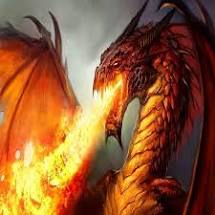 Everyone jumped away from the large steel crate as the dragon let out a deafening roar. Experience told them that a deadly stream of fire was about to follow.

Chad stood up in the passenger seat of the vehicle, held onto the windshield, raised his left hand high, and yelled, “Off with the dragons head!

The driver, Ryan, looked at him in disbelief. “What?”

Chad looked down at him. “If it won’t get out of the cage then off with its head!”

“But sir, didn’t my men and I just risk our lives to steal the Red Dragon and bring it here so Qbit and the Keepers would come to rescue it allowing us to capture them?”

Ryan threw his hands in the air. “If we kill it, then they won’t come to get it!”

Chad sat back down. “Ah, I see your point, number two.”

Ryan hung his head and pinched the bridge of his nose. “It’s Ryan.”

Chad, looking frustrated said, “This is taking forever. I’m the head of the largest illegal animal smuggling operation in the galaxy! I’ve got people to see and illegal animals to smuggle! I don’t have time for this!”

“Sir we’re doing our best but we’re talking about a very angry fire breathing dragon here. It’s not like we can coax it out with a piece of string!”

Chad flicked away a piece of black soot from his white jacket. He wondered if it was from anyone he knew. “I bought you those electric prod things you wanted, didn’t I? Why not use them.”

“We tried that but that’s how Muldoon ended up in the hospital.”

Chad looked up suddenly and a look of sadness spread across his face. “Not Muldoon!”

Surprised by Chad’s unusual concern for one of his workers, Ryan whispered, “I’m afraid so, sir.”

Chad pulled on the crease in his pant leg. “That’s a shame, I really liked his accent.” He paused for a second then added, “Good thing he was expendable.”

Ryan shook his head for two reasons.  One, he had let himself believe, for a second, that his boss might actually have a shred of empathy and, two, he should never have taken this assignment in the first place. “Sir, he’s not dead, he’s expected to fully recover. And, just so you know, every person here is an important part of this mission!”

Ryan fought desperately to control his anger. “Sir, just give us another thirty minutes for the extra tranquilizer dose to take effect. Then we’ll be able to safely unload him.”

Chad sighed and looked at his watch, “I’ll give you twenty minutes, then make it so number two!”

Ryan pinched the bridge of his nose again. “Yes sir, thank you sir.” He turned and headed off towards the sound of screams and the pungent smell of Sulphur and hot metal.